The research team of Professor Markus Morgenstern, chair of experimental physics (solid state physics) at RWTH Aachen University, discovered new possibilities for quantum electronics, with the support of colleagues from the Technical University of Vienna and the University of Manchester. The physicists combined two ultrathin materials, namely graphene and Boron-Nitride, in a way which makes it possible to switch individual electrons between two states. For the first time, this allowed them to invert the so-called valley degree of freedom of the electron. The new discovery could be useful for advanced information processing. The research results have now been published in the scientific journal ‟Nature Nanotechnology”. 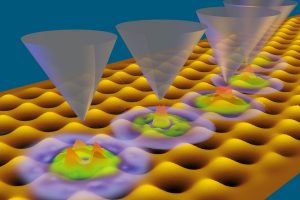 Graphene is a layer of carbon atoms one atom thick. If one confines single electrons of the graphene in a very small area via electric fields, they can be easily controlled. For example, shifting such an electron by a few nanometers can change its character: the so-called valley degree of freedom, which describes the electron quantum mechanically, can be switched. The valley degree of freedom provides exactly two possible states for the electron, just like a human can either be a woman or a man. In pure graphene, the valley degree of freedom is indefinite, i.e. the electron is simultaneously a woman and man. If the graphene is deposited on a layer of Boron-Nitride, also one atom thick, one state becomes more likely. Additionally, the favorable state depends on the position of the electron allowing minimal movement to be used to switch between the two possibilities. ‟The electron can be manipulated into the state ʼwomanʼ, ʼman,ʼ or into a superposition of the two states. If one selects the superposition, one is able to calculate with both possibilities simultaneously. This amounts to two possibilities for a single electron, four possibilities for two electrons, eight possibilities for three electrons, and so on, resulting in an enormous gain in efficiency. This gain is exploited in a quantum computer,” analyzes Morgenstern.

The new option of switching the valley degree of freedom must first pass a number of tests, before its applicability can be evaluated. Primarily, the research team aims to demonstrate that the superposition state oscillates between its two possible states on the nanosecond time scale. Afterwards, they must show that several electrons can be employed simultaneously for this task. ‟If these goals are achieved with competitive results, the new degree of freedom can be used in applications,” says Morgenstern.

The research is embedded in the large-scale project ‟Graphene Flagship,” which is funded with 1 billion euros by the European Union, whose mission is for Europe to significantly profit from the on-going commercialization of graphene and other two-dimensional materials. The largest Flagship site in Germany is located at RWTH Aachen, where the research activities are coordinated by the ‟Aachen Graphene & 2D Materials Center.” The recently founded center aims to combine high-quality 2D materials to demonstrate their potential for new, competitive devices.