The research team led by Gerard Verbiest and Christoph Stampfer at the Physics Department at the RWTH Aachen University, discovered a new possibility for ultrasound detection. The physicists fabricated a graphene resonator on a silicon substrate in a way that the device could be mounted onto an ultrasound transducer. For the first time, this allowed them to measure the responds of a graphene resonator to ultrasound propagating through the substrate. They achieved a resolution of 7 pm/√Hz by making use of the unique properties of graphene. As the resolution solely depends on the electronic properties of the graphene, they show that the detection also works away from any mechanical resonance of the suspended graphene. The new insights could be very useful for numerous sensing applications at the nanoscale. The research results have now been published in the scientific journal “Nano Letters”. 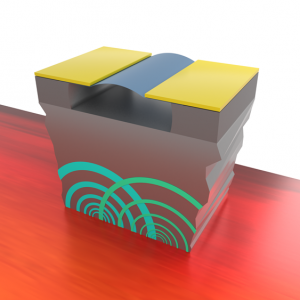 Ultrasound detection is the key in visualizing subsurface features. In our daily life, ultrasound imaging is commonly used to monitor babies in wombs or to monitor micro cracks in airplanes. The direct miniaturization of these imaging techniques down to the nanoscale has proven to be a major challenge. Nanometer resolution was achieved with an atomic force microscope cantilevers; however, they show no or little responds at the required frequencies of tens of MHz. Graphene resonators now seem to resolve these issues. “The integration of a graphene resonator on the back of an atomic force microscope cantilever paves the way for high-sensitive ultrasound detection at the nanoscale on arbitrary substrates and surfaces.” analyzes Verbiest.

The new ultrasound detection scheme must first pass a number of tests, before its broad-range applicability can be evaluated. Primarily, the research team aims to identify the physical mechanism that transduces the ultrasound from the substrate into the graphene resonator. Afterwards, they plan to show a direct quantitative relation between the ultrasound in the substrate and the detected amplitude. “If these goals are achieved, the graphene-based ultrasound detector can be indeed used for subsurface imaging at the nanoscale.” says Verbiest.

The research was performed within the framework of a proposal granted by the European Research Council. In addition, the work is embedded in the ‟Aachen Graphene & 2D Materials Center,” the largest Graphene Flagship site in Germany.