Researchers of RWTH Aachen University and AMO GmbH in collaboration with the Research Centre Jülich and the University of Siegen have investigated metal/molybdenum sulphide/silicon structures in order to understand the charge transport in such structures and to explore the possible potential of molybdenum sulphide to use as a dielectric in vertical heterostructured devices. The work was recently published in ACS Applied Nanomaterials (DOI: 10.1021/acsanm.8b01412). 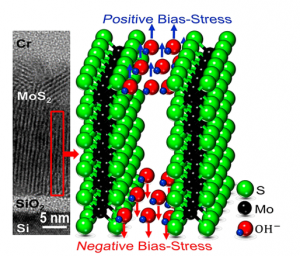 In this work, vapor-phase sulphurized large-area molybdenum sulphide film was used to fabricate capacitor structures on silicon substrates. Dielectric constant values for MoS2 were extracted and presence of mobile negative ions in MoS2 were demonstrated. The work has brought forth an advanced understanding of defects and interface states which can have a significant influence on the electronic properties of MoS2.

The research work was funded by the European Commission through the European Regional Development Fund (HEA2D, 0801002) and the Graphene Flagship (785219).