The Chair of Electronic Devices at RWTH Aachen University and AMO GmbH in collaboration with the University of Granada has experimentally demonstrated graphene/silicon (G/Si) photodiodes that reach nearly 100% quantum efficiency. The work was recently published in ACS Photonics and has been selected as ACS Editor’s Choice article, highlighting the importance of the research work. The work will also appear on a cover page of Journal. 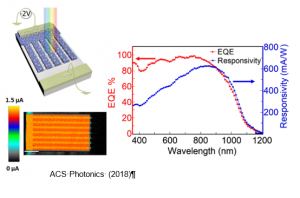 The research work was funded by German Research Foundation (DFG GRK 1564), the European Commission through the project Graphene Flagship (785219), the Spanish Ministry of Education, Culture and Sport (MECD) and the University of Granada through the project TEC2017-89955-P and the predoctoral grant FPU014/02579.